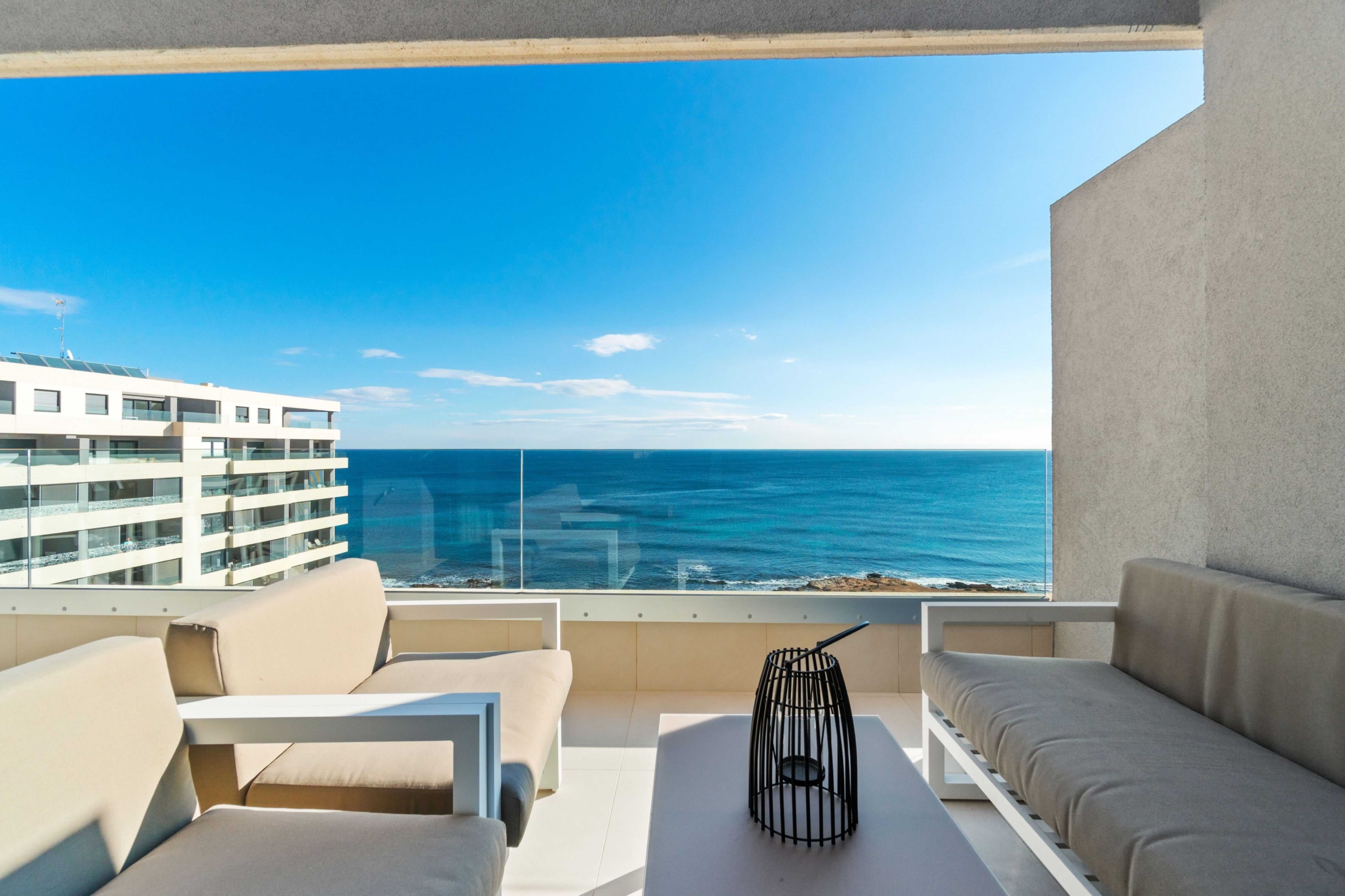 The Valencian Community (Province of Alicante, Valencia and Castellon) was the preferred region for foreigners to buy a house in our country.

The sale and purchase of homes by foreigners (residents and non-residents) in Spain decreased by 24% in 2020. Specifically, they have fallen from 102,264 transactions in 2019 to 77,492 over the year marked by the pandemic, according to data published this week by the statistical centre of the General Council of Notaries.

The restrictions on mobility caused by the pandemic have brought the Spanish property market to a standstill, especially in the case of foreign buyers. However, this 24% drop is not far from the overall 17.7% drop in sales and purchases in our country.

The sale and purchase of homes by foreigners in the different autonomous communities was very uneven. In seven of them there were increases, while in the other ten there were decreases.

The Valencian Community was the preferred region for foreigners to buy a house in Spain last year. 20,660 transactions were closed, far from the almost 30,000 of 2019, but the only autonomous community that recorded more than 20,000 signatures.

Accompanying the Valencian Community on the particular podium, Andalusia (14,754 operations) and Catalonia (12,406). Madrid (6,681), the Canary Islands (5,278) and the Balearic Islands (4,107) are far behind. In 2020, Asturias, Cantabria, Extremadura, Galicia, Navarre and Rioja fell below the thousand signature mark. 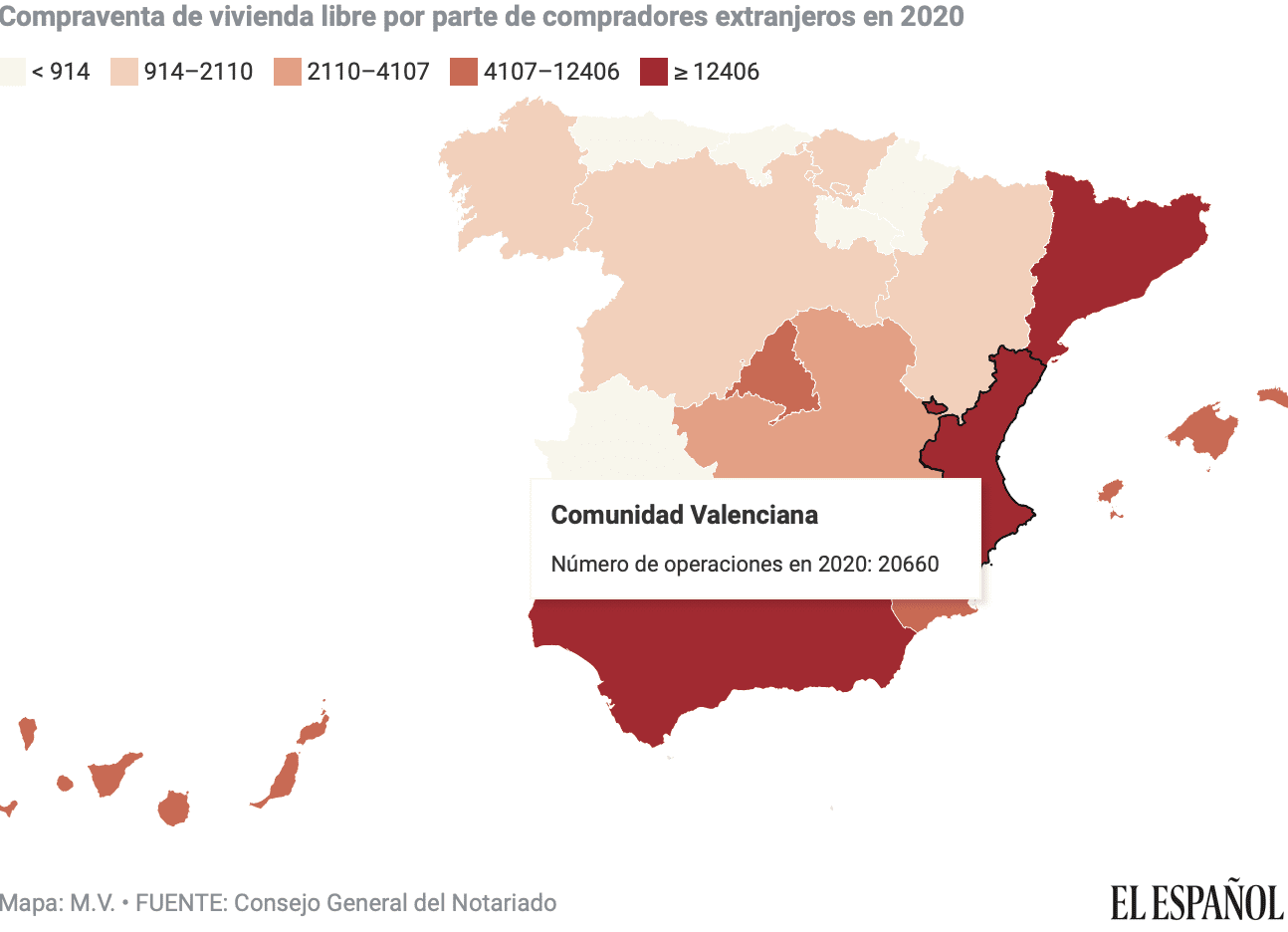 When it comes to analysing the origin of foreigners who buy a home in Spain, the classics come into play, even in a pandemic. Thus, the English and the French are in the lead, closely followed by the Germans and the Romanians.

Although it is important to differentiate between residents and non-residents, as the list of countries clearly indicates the reasons for the purchase: second home or holiday home and accommodation because they work in Spain.

The countries whose residents in Spain bought more homes in 2020 are Morocco, Romania and Italy. Among non-residents, the United Kingdom, Germany and France top the list. Workers versus tourists.

The Conseil Général du Notariat highlights the decline in transactions by the British, our main foreign buyer even maintaining its position as the leading group in total volume. Their purchases recovered in 2018 (7.5% annually), after the Brexit referendum in the summer of 2016, although they have remained negative since the second half of 2020, with a 12.2% drop.

A striking case among the statistics. The number of transactions by Chinese buyers has increased in recent years in Spain, until 2020. Last year ended with 2,457, a 45% drop compared to 2019. 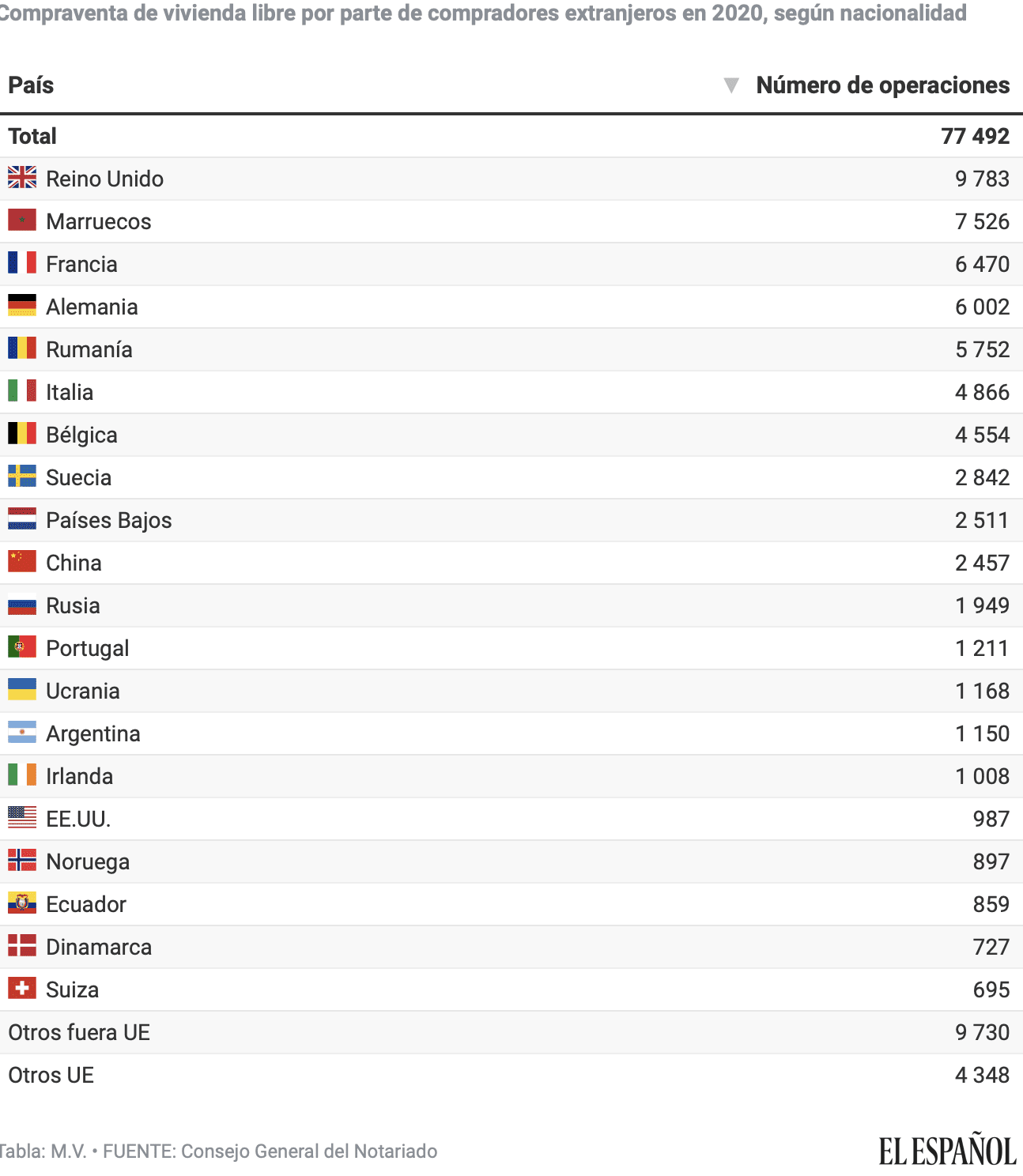 Who pays the most

It is also interesting to know who paid the most to buy a house in Spain. The Nordic countries, the Germans and the Americans occupy the first places in the notaries’ statistics.

The average price paid by foreigners for a house in our country reached 1,778 €/m2, which is higher than the 1,452 €/m2 that closed the average of all the houses bought in Spain in December of last year.

The British, representing the most important part of the foreign residents who bought houses in Spain in 2020, are also above the average price paid for houses with 1.790 €/ m2. 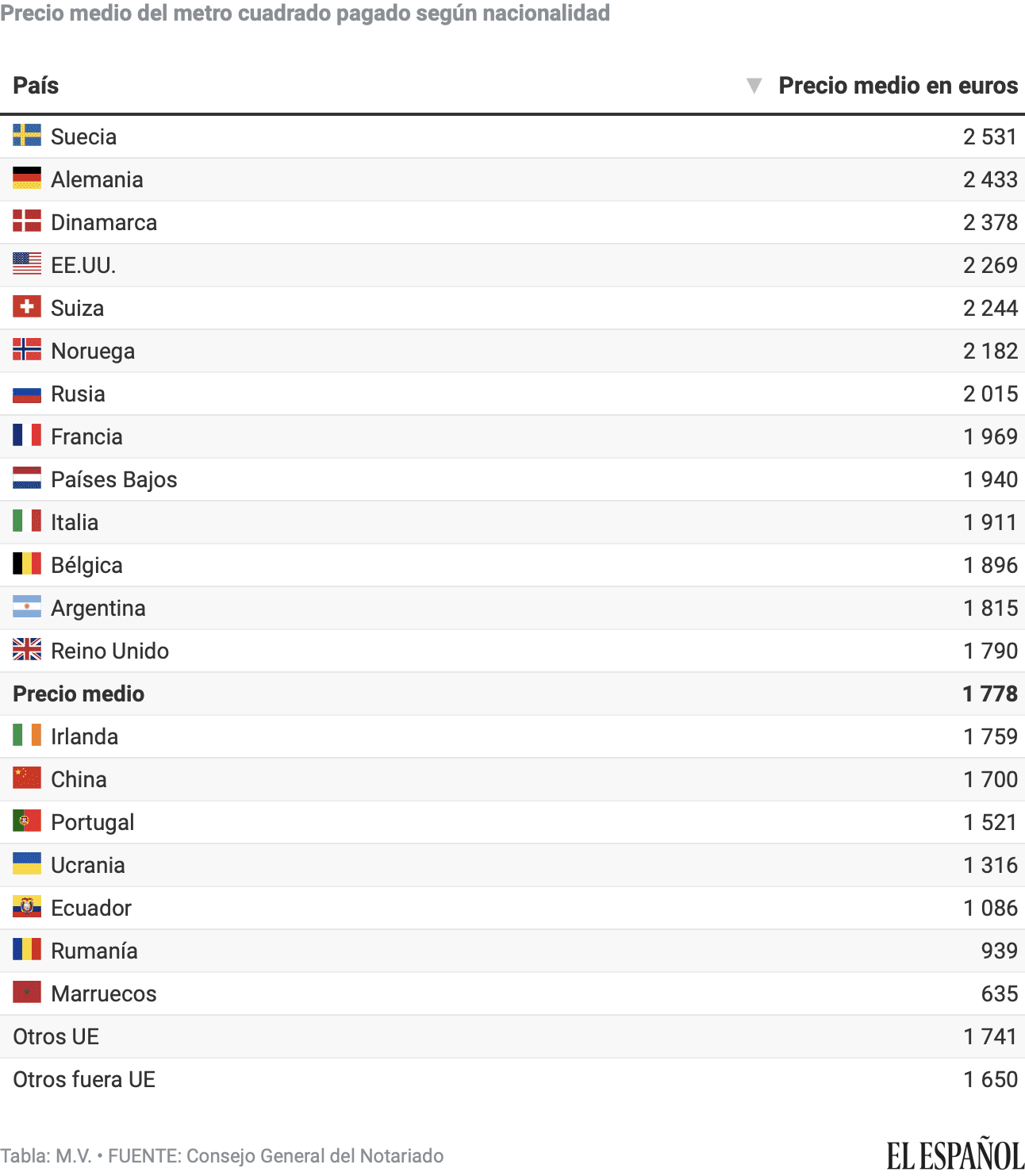 Why it’s a good idea to invest in Spain Property for Sale in Spain - How to find the perfect investment propertyWant to buy a property in...
Continue reading
by Click for the Sun 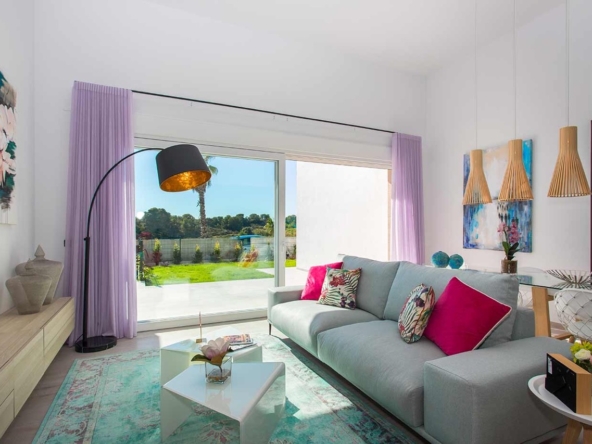 Property for Sale in Spain – The Ultimate Property Search Tool

Choose from hundreds of properties for sale in Spain. Buying a property in Spain is an exciting...
Continue reading
by Click for the Sun 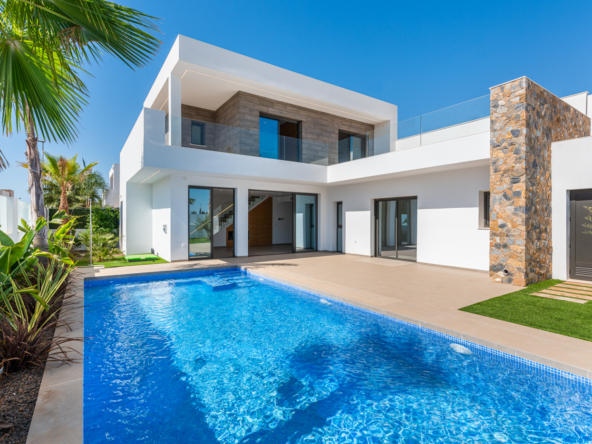 Property to sale in Spain

In this article we'll show you how to sell your property in Spain If you want to sell your...
Continue reading
by Click for the Sun