The marina with the largest number of moorings in the whole Valencia region is located in Torrevieja, popular city in the south of the Costa Blanca . Its 3 marinas accommodate up to 2,500 places and a varied offer of water sports and restaurants and Bars. Torrevieja the water sport par excellence :

It is a space that faces the Mediterranean and where small boats, racing boats, elegant sailboats and luxurious yachts converge. The port of Torrevieja is positioned as an attractive space for lovers of recreational and sporting nautical activity. Its three marinas hold the largest number of moorings in the Valencian Community, surpassing the 2,500 places on offer. Its tourist charm has enabled it to emerge around it businesses dedicated to the restoration, bars of drinks and companies that offer diverse aquatic activities. However, it also conserves part of its roots, with the Poniente dam that serves as a salt pier, and the dock that houses the fishing fleet and the auction house where the auctions are held.

Going on foot the Levante dam is perhaps the best way to get a panoramic view of what the torrevejense port is today. It is an elevated walk with a route of 1,440 meters in which there is almost always someone, from tourists who do not lose the opportunity to take photos surrounded by seagulls to neighbors and visitors who frequent it to walk and play sports. From there you can see the Poniente dam, located perpendicular, and maintains a tape that transports the salt from the salinera to be loaded later to the merchant ships. The area between the two dikes, which is about 900,000 square meters, is the one that houses the three marinas of Torrevieja, with its three sports facilities, all under concession, as the port is managed by the Generalitat.
The marina Marina Salinas is the newest of the three and the one next to the Levante dam. It has 724 mooring points with capacity for boats up to 35 meters in length. It began to explode in the year 2008 and although it still has empty spaces, it supposes an important pole of tourist attraction by its offer. There are several hotel businesses with large terraces next to dozens of moored boats. The premises are filled especially since sunset and come alive as night falls, frequented, mostly, by young people looking for commercial rhythms. Also there have been installed companies specialized in water sports such as water skiing, paddle surfing, kayaking or snorkeling.

Since 1967
In the center of the wharf are the facilities of the Real Club Nautico de Torrevieja, the precursor of the sport activity in the port of the city and whose first stone was placed in the year 1967, with the beginning of the international tourism boom. Construction was rapid and its facilities were inaugurated two years later. Located on the Paseo Vistalegre, offers windsurfing, sailing, kayaking … and many other disciplines that have trained athletes who have achieved an important track record internationally. Its surroundings have a cafeteria, restaurant, swimming pool, gymnasium and other areas for members only.

The other sports area of ​​the port is the International Marina, with 859 moorings and a number of bars and restaurants next to boats that usually include live musical performances. There you can listen from Spanish music to British pop. Also located in the public domain, it draws attention to the fact that there was also raised an urbanization in which there are registered half a hundred neighbors and an aparthotel.

Leisure activities in the port also include three floating museums, two of which can be visited. One of them is the Submarine S-61 Delfin, the first ship of the Spanish Navy that offers to all who visit the possibility of knowing the interior of a submarine and to imagine what the living conditions of its crew were like. In the same area are the Patrol of Customs Surveillance Albatros III and Pailebote Pascual Flores, a reconstruction of the original vessel that caused controversy as much by its cost as by the state in which it is. The wooden boat cost more than four million euros to the City Council and can not currently be navigated or visited on the inside. Its state is such that it has to be connected to bilge pumps because it makes water.

Another attraction of the port is its fishing activity, which although has declined a lot in the last decade, continues to rely on boats that leave every day to fish and whose catches are then auctioned at the auction. The objective of Torrevieja is to open this activity to tourism so that visitors can see the whole process. However, it is unknown when and how it will be done. This is because the Generalitat bets on moving the activity to the Poniente dam, as it was almost a decade, so that would gain 42,471 meters for nautical uses and would release the current part of the auction. Thus it has been established in the Delimitation of public spaces and port uses of the port that is at this moment in phase of public exhibition. The reality is that for this to be feasible, other infrastructures such as a new ice factory and a fish market should be enabled first, and it does not appear that this is a project to be undertaken in the short term.

In parallel to that, the Generalitat announced it has launched a commission called “Port City Space” which aims to study and seek solutions to achieve the best integration between the port and the municipality. And that is where they must find solutions so that Torrevieja can continue to be a nautical tourism paradise without losing its fishing essence. 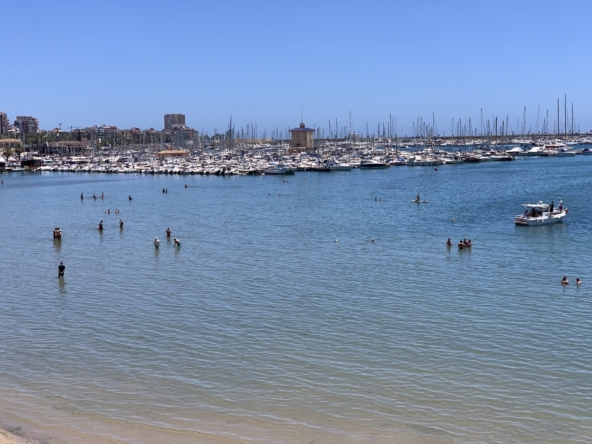 2 of many beautiful car routes in Spain

With a surface area of more than half a million square kilometers, Spain has more than enough room...
Continue reading
by Click for the Sun

Here we present 5 family activities in Benidorm   Benidorm, the popular resort on the...
Continue reading
by Click for the Sun