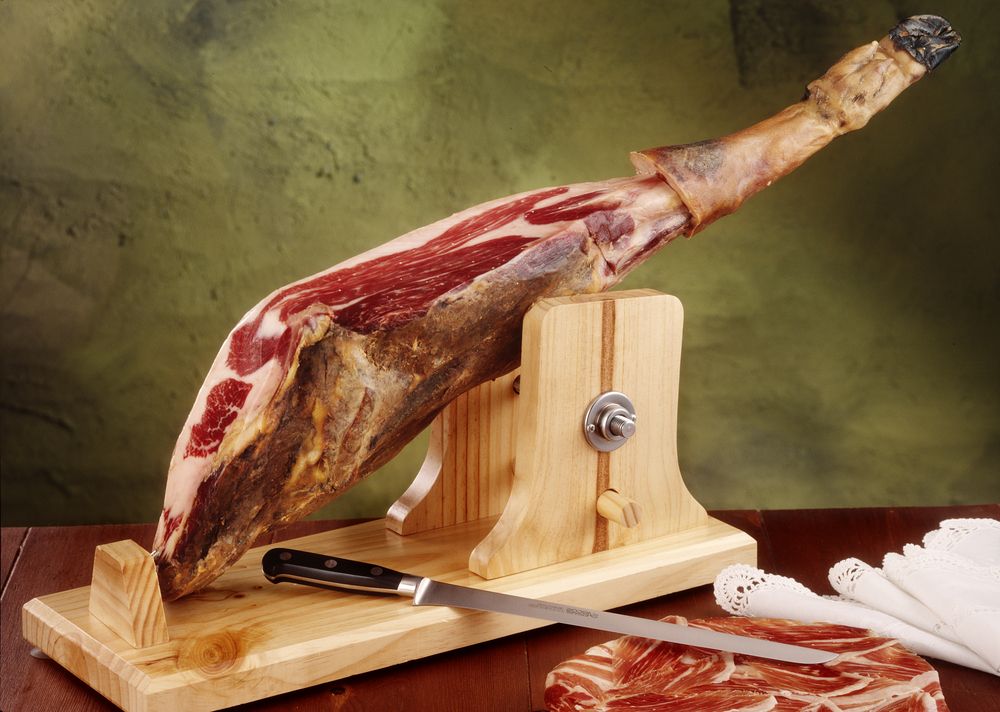 Have you ever been to Spain for tapas and seen those bars full of small portions? Well, in Spain it is common for the most important Christmas meals to start with a snack of starters, which may well remind you of those tasty bars. Iberian ham, all sorts of delicious cheeses, seafood, preserves, pickles, tasty specials for these days… You’ll find it hard to believe that these are just the starters.
Then there are the starters and it is very common to have a spoonful of soup or broth. Andalusian puchero, Catalan escudella, garlic soup (for example in Castilla-La Mancha), almond cream soup in the Balearic Islands or trout soup (common in Castilla-León) are among the most popular.
Among the main courses, roast meat (especially lamb, suckling pig or veal, and if possible prepared in a wood-fired oven) and fish such as sea bream or baked sea bass are the most common.

The tables are well laid, as we said, and that is no exaggeration. At Christmas, the meals last a long time and the pastries only prolong this sweet moment. It is no coincidence that Christmas in Spain has a sweet flavour, much to the delight of adults and, above all, children. Each region has a long list of specialities that will tantalise the taste buds of all food lovers. At snack time, don’t miss the Christmas specialities of turrón, polvorones, marzipan and mantecados, not forgetting the roscón of the Three Kings. During the festive season, this cake, known as roscón, can be found in most pastry shops and restaurants. Spaniards are particularly fond of it on the evening of 5 January (when the Three Kings parade takes place) and on 6 January, once the children have received their gifts. Each roscón contains a small figurine that is supposed to bring good luck to the person who finds it.

In Spain, large Christmas meals often begin with appetisers that evoke these delicious tapas. You will find excellent cheeses, seafood, canned specialities, all kinds of cold meats, including Iberian ham, and an infinite number of small dishes specially prepared for the holidays. And that’s just the starters! You won’t believe your eyes.

At Christmas, ham takes on great importance in Spain. Although it is a product that is present in our kitchens and pantries all year round, during the Christmas season it becomes one of the essential products on every table. It is also one of the most common gifts, both at home and at work, and more and more households are choosing to cook small dishes to share as an aperitif, rather than a large single dish on the table. Similarly, Iberian ham has become one of the most famous and appetising appetisers at this time of year. It is usually accompanied by Iberian sausages, some seafood such as prawns or canapés of different varieties.

In fact, we invite you to toast with cava, a dry, sparkling white wine produced in Spain, ideal for special occasions. When toasting, don’t forget to say “salud” (health)! Another expression used when toasting is “tchin-tchin”. But the most popular expression is probably “¡Arriba, abajo, al centro y adentro! (up, down, centre and in!). 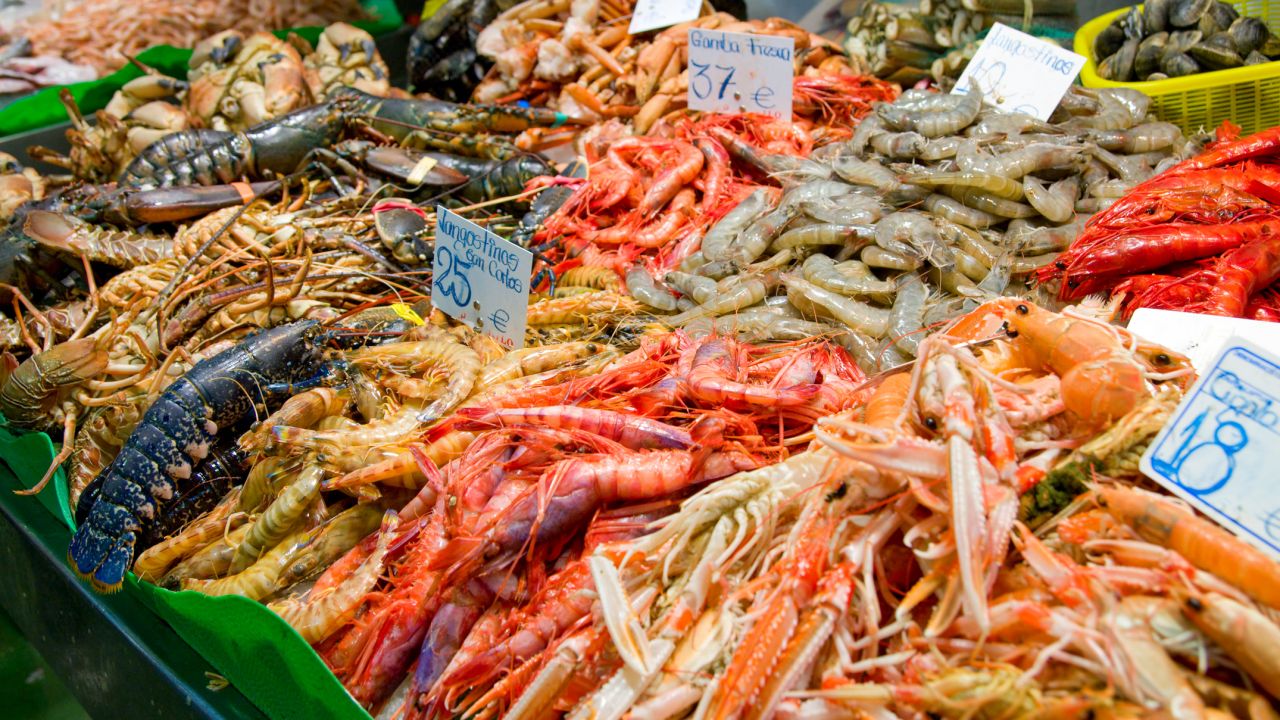 Seafood has become an essential part of the Christmas table. One of the most sought-after species during the festive season is the red shrimp. You can cook it as a starter, as the main ingredient of a “sea and mountain” dish or as a very important element of fish and seafood soups, another star recipe at this time of year.

On the other hand, lobster is also a very common dish eaten on Christmas Eve or at Christmas, and many people dare to cook it in the oven, on the grill, or even as part of a “caldereta” (stew). As for shellfish, sea goat, crab and mouth are among the most popular, for stuffing, stews or also as part of the typical soups or “zarzuelas”.

Finally, for shellfish lovers, at Christmas, clams, cockles, razor clams or “coquinas” are usually cooked. Without a doubt, their role is essential in Christmas appetisers, where they are steamed, cooked with garlic and parsley or simply grilled. When it comes to fish, the ones that are usually cooked for Christmas are the ones that have an exquisite and fine flavour. The recipes are usually prepared in the oven and accompanied by a garnish. In this case, we invite you to cook sea bream, sea bass or sea bream, prepared in the oven will give you very good results, and many also opt for hake or monkfish, which are an essential ingredient of seafood and fish soups or stews – which, as we said, are one of the most common dishes on Christmas Eve or Christmas Day.

Stuffed turkey baked in the oven 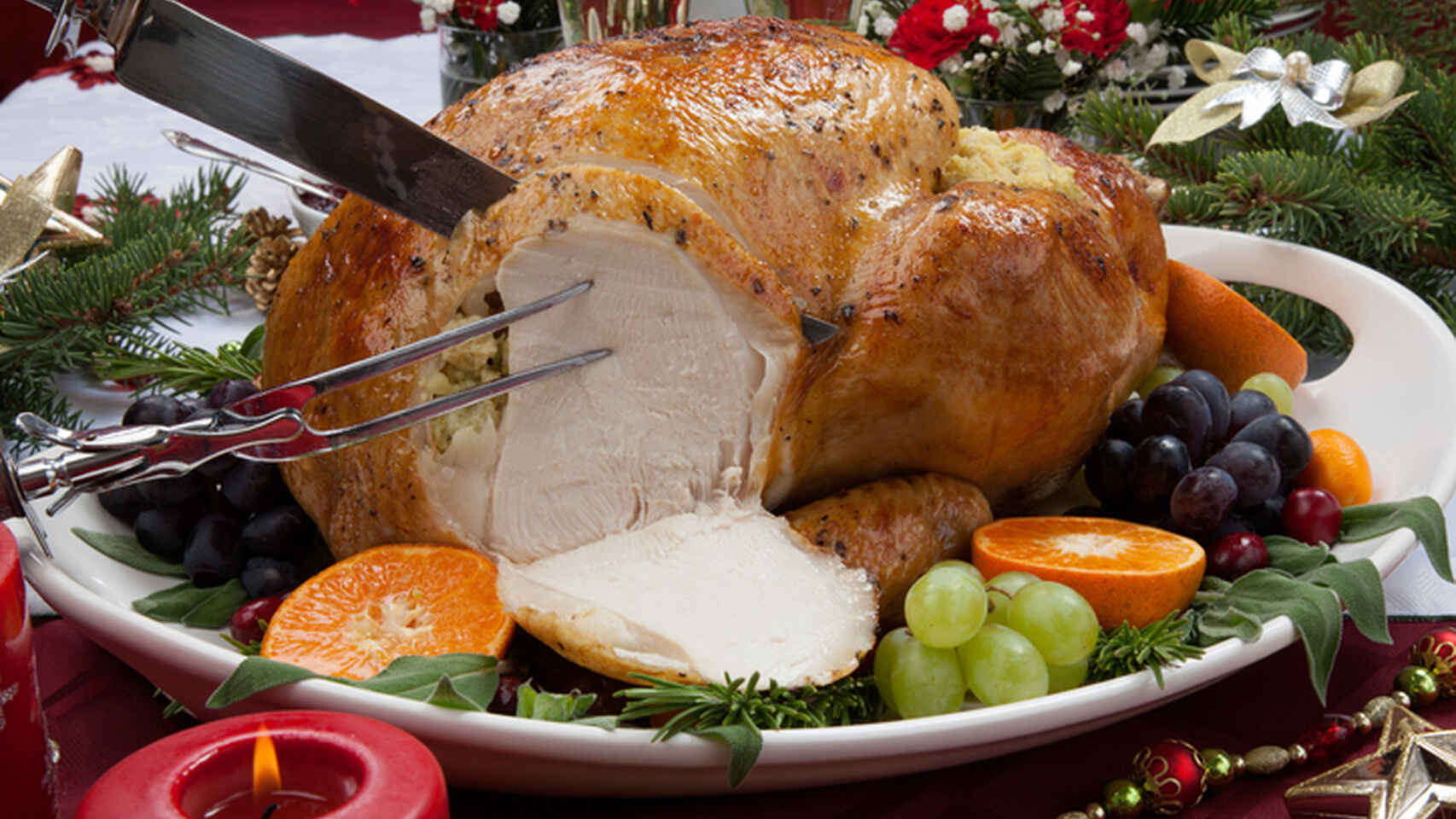 Although the quintessence of the tradition of stuffed turkey comes from the United States and the famous “Thanksgiving Day”, it is also true that in Spain it is becoming more and more common to prepare this dish for Christmas Eve, Christmas or New Year’s Day. It is one of the most typical Christmas recipes, either because we have always seen it in typical American Christmas films or because it is a really delicious dish to share at family celebrations. The key to making this recipe is to clean and pluck the turkey well, add sweet wine to make it juicy, prepare a rich and tasty stuffing and have the patience to leave it in the oven for a few hours. Remember that it is calculated that for every kilo of turkey you need to add 45 minutes of cooking time! 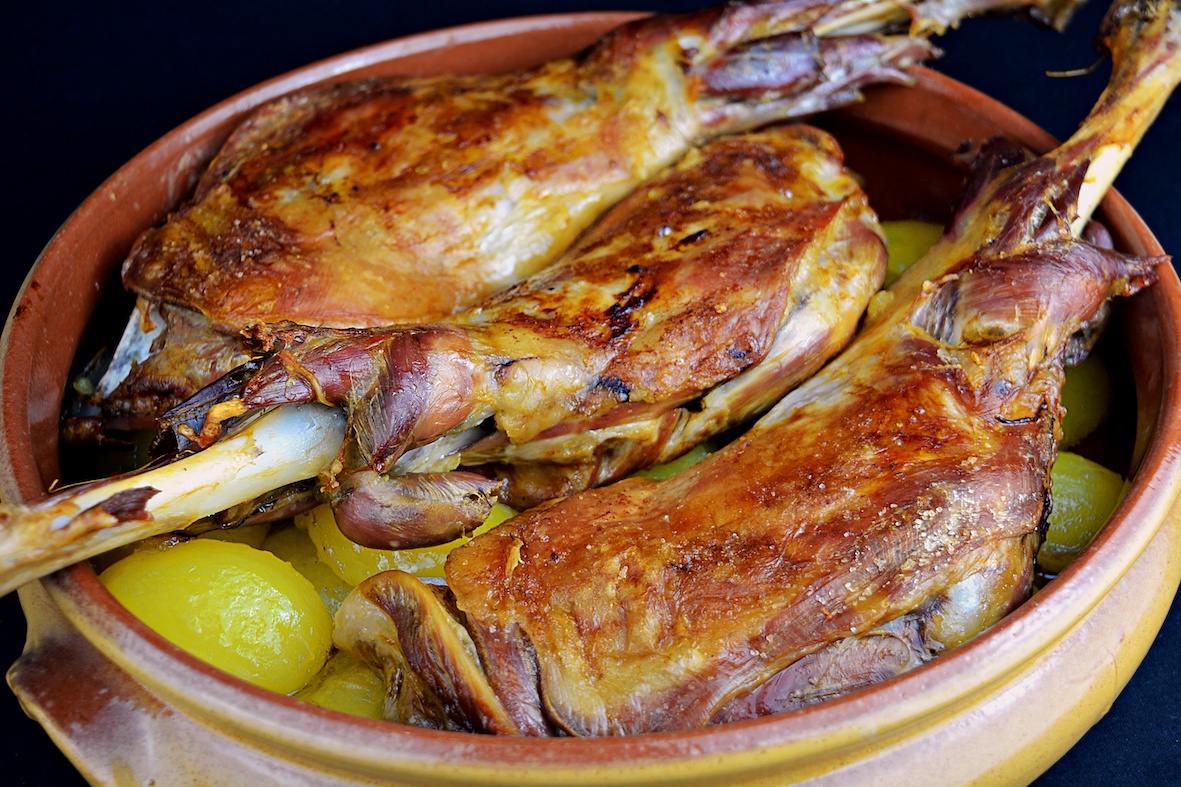 One of the star dishes eaten on Christmas Eve or Christmas Eve is roast leg of lamb or suckling pig. Two delicious meats that stand out on these festive days, so important in the calendar.

With a suckling pig or lamb baked in the oven, the key is to make sure it’s really juicy on the inside and the skin is crispy on the outside. One of the most interesting tips is to baste the leg of lamb or suckling pig every 20 minutes with the water in the oven tray.

Although the fastest way to prepare such a roast is in the oven, it is not the only way. Indeed, if you don’t have much time on the day of the party, it may be worthwhile, for example, to dare to cook the lamb at a low temperature and keep it in the fridge to give it the final touch at the last minute.

The best accompaniments for these meats are usually confit potatoes, caramelised tomatoes or seasonal vegetables.

And for dessert… nougat 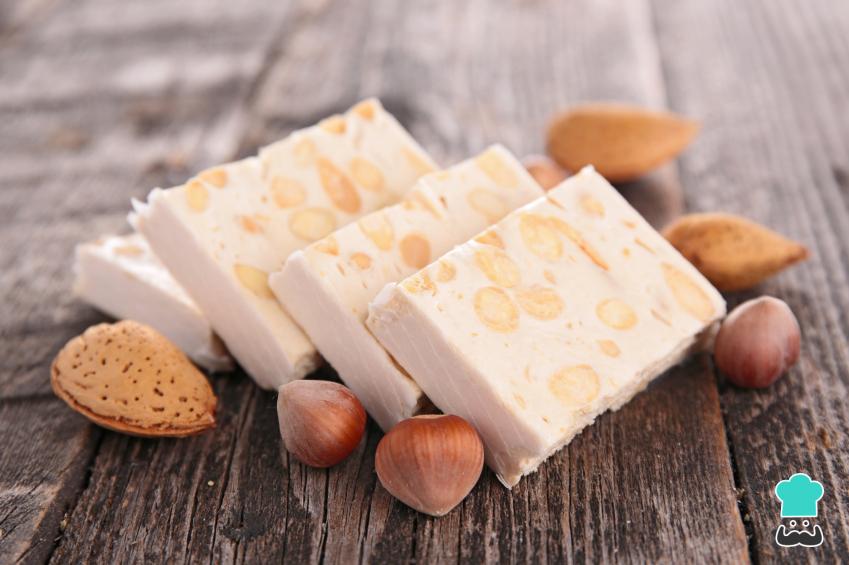 To finish off a good Christmas meal, a turron is a must. They are the absolute protagonists among the sweets of the Christmas festivities and an age-old tradition in our country: turrón is made from a paste obtained by cooking honey and sugar, with or without egg whites, to which toasted and peeled almonds are added after kneading. Today, however, it is not only the typical hard almond nougat that is consumed, but we can find a multitude of different flavours of nougat and different preparations.

If you want the next year to be wonderful, we suggest you follow the tradition of eating 12 grapes at the sound of the 12 strokes of midnight on 31 December. This is the time when the whole country is watching television, so you can swallow each grape to the rhythm of each bell. If you manage to eat all the grapes in time, you will have a lucky year. The most emblematic place to live this experience is the Puerta del Sol in Madrid (in this case, don’t forget to get there a few hours before). If you are in another city, you can also enjoy this celebration, which is usually held in an emblematic place.

New gastronomic experience in Murcia:   Do you like Spanish gastronomy?   We...
Continue reading
by Click for the Sun 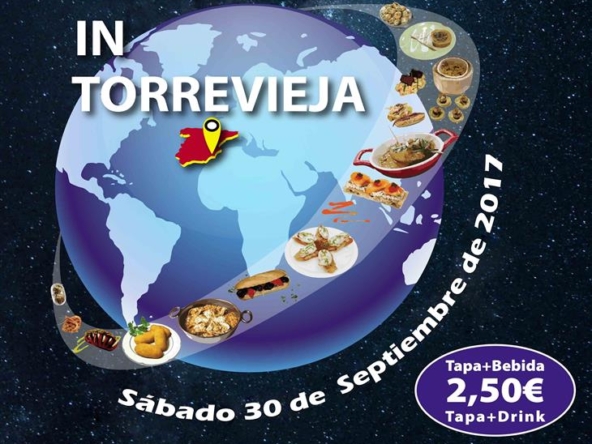 Torrevieja hosts the 30th International Tapas Day If you bought a property in Torrevieja or the...
Continue reading
by Click for the Sun

Our recommendation for a good restaurant “Casa Araez”